Rambhau Mhalgi Prabodhini is engaged in the capacity building of social activists and elected representatives since 1982. It also conducts training programmes to motivate voluntary organisation and people working in social sector. In 2000, the Prabodhini started an award named ‘Antyodaya’. The award amount is Rs.1 Lakh and is presented with a memento. The award is sponsored by Late. D. H. Gokhale and Shyamala Gokhale Trust, Mumbai. The award is for any individual who is committed for the upliftment of the downtrodden of society.

Since 2000, the Antyodaya award has been given to:

Narayan Despande, who hails from a village with drought-like conditions – Athpadi of Sangli District, Maharashtra – formed an organisation Sheti Pariwar some 37 years ago. Through this organisation, he spread awareness about agriculture planning and reduction in agriculture expenditure. This helped the farmers around to remain in the village instead of migrating to cities for their livelihood, thus making their making life economically stable.

Narayan Despande, who hails from a village with drought-like conditions, Athpadi, Sangli District, Maharashtra formed an organisation ‘Sheti Pariwar’ some 37 years ago. Through this organisation, he spread awareness about agriculture planning and reduction in agriculture expenditure. This helped the farmers around to remain in the village instead of migrating to cities for their livelihood, thus making their life economically stable.

Dada Gaokar has been working for the upliftment of poor since 40 years. Through Nagari Vikas Parishad, Vidhyarthi Utkarsh Mandal and Samata Parishad, he put all his efforts for social and economic equality. For the development of Kokan, he formed Kokan Vikas Parishad. For poor students he assisted them in completing their minimum required education to become self-sufficient.

Dr. Bhiao Gasti hails from Berad, a community branded as “criminal.” He sacrificed his well paying job as a chemical engineer to devote full time to help Devdasis. ‘Devdasi’ refers to women offered by their parents to the goddess Yallamma and deserted within the compound walls of a temple. They thus become orphans exploited in every way possible, some sexually. Subsequently many end up as prostitutes. Though banned by law, this tradition is practiced underground in back allies of several villages and towns. Dr. Gasti formed an NGO named Utthan (which means upliftment of downtrodden) to fight against this tradition and to rehabilitate these women.

Dr. Gasti provides them with vocational training allowing them to be self supporting and lead a meaningful life with dignity.
For the past 30 years, Dr. Gastihas been engaged in the upliftment of Berad-Ramoshi, the tribe in southern Maharashtra (Kolhapur ) the tribe has stigma from pre-independence era as being a criminal tribe and the Devdasis in northern belt of Karnataka. In the work related to Berad –Ramoshi tribe they organised the tribal people, educated them and gave them self identity. In the work related to Devdasis he appealed the govt. to look into their problems which resulted in a monthly pension allotment of Rs.500 along with housing facilities for them.

Dr. Bhiao Gasti also provides vocational training for Devdasi’s girls so as provide them employment. He has established an NGO ‘Uthan Sansthan’. To change the social scenario Dr. Gasti has devoted his entire life and because of his devotion his work bore fruits in Karnataka, Andhra Pradesh and Maharashtra

This award was presented to Dr. Girish Kulkarni of Ahmednagar. Dr. Kulkarni, a young and spirited social worker, has been working for the welfare of the children of professional sex workers, physically challenged youth and other weaker sections of the society in Ahmednagar. His organisation, Snehalaya is also running a care centre for the infants born in the red-light areas. This Antyodaya award was presented to Dr. Kulkarni at a function held at Dombivli on April 5, 2007 at the hands of noted thinker and journalist Bhanu Kale, editor of Antarnaad, a Marathi magazine. Dr. Medha Naniwadekar, member of RMP’s managing committee, presided over the function at which Dr.Pravin Patkar of Prerana, Mumbai, was a special guest.

The award for 2006 was presented to Nirupama and Sunil Deshpande, both engaged in upliftment of Adivasis in Amaravati district. Deshpande is the founder of the Sampurna Bamboo Kendra. He is also the convener of the Rashtriya Karigar Panchayat. They do network for various NGOs through ‘Koshish’ and ‘Chalana’. The couple received the award from Prof. Bal Apte, Vice President of RMP. The function was held on March 3, 2006 at Pune.

The award for 2005 was presented to.Sunanda Patwardhan, who has been striving for the past 20 years in the tribal areas of Jawhar taluka for the overall development of the tribals under the auspices of the Pragati Pratishthan. She was presented the award in her area of operation at Jawhar in presence of hundreds of tribal people. Nitin Gadkari conferred the award upon her.

This year, the award was presented to Dr. Baba Nandan Pawar, a social worker from Nagpur. He also significantly contributed for education of the tribals and other weaker sections. Dr. Pawar is the fifth recipient of this award. The award presentation ceremony was held on May 22, 2004, Dadar, Mumbai. Dr. Nandan Pawar was felicitated with the award by Andaman-Nicobar Lt. Governor Prof. Ram Kapse.

The award was presented to Dr.Avinash Acharya, well-known social activist from Jalgaon, on April 5, 2003, at Dadar, Mumbai, in a specially organised function of the well-wishers of the RMP.Hon’ble Moropant Pingale, a senior Pracharak of the RSS, conferred the award. Dr. Ashok Kukade, Zonal Sanghachalak of the RSS, graced the function as the chief guest.

The award was presented to Dr. Sharad Kulkarni, veteran social worker, on 3rd March 2002. Goa Chief Minister Manohar Parrikar was the chief guest of the function which was presided over by social analyst Dr. S. H. Deshpande.

Bhatke Vimukti Vikas Parishad in Maharashtra is working for the upliftment of down trodden class particularly “Pardhee” Society. GirishPrabhune, renowned Karmayogi, has put two decades in this mission. The Antyodaya Puraskar for 2000 was awarded to Girish Prabhune for his dedication and hardwork for the upliftment of Pardhees. The function was held on January 14, 2000, at Dadar. 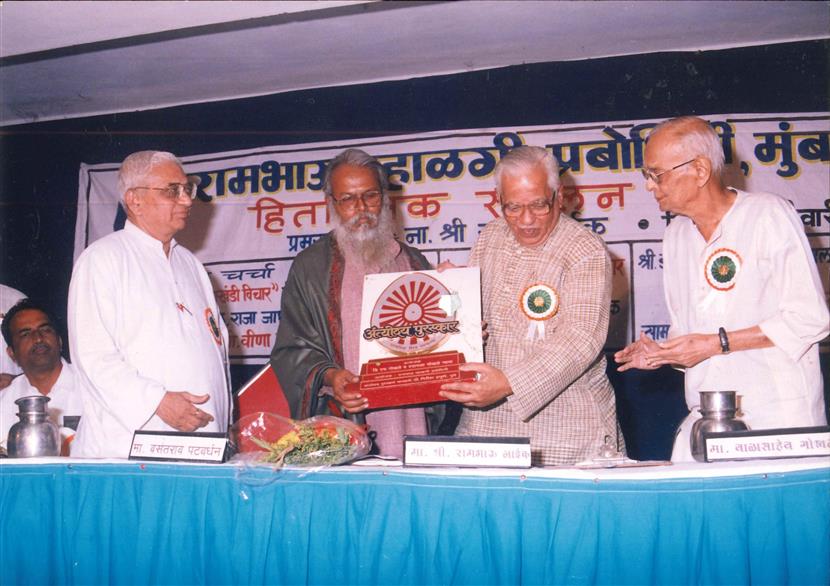 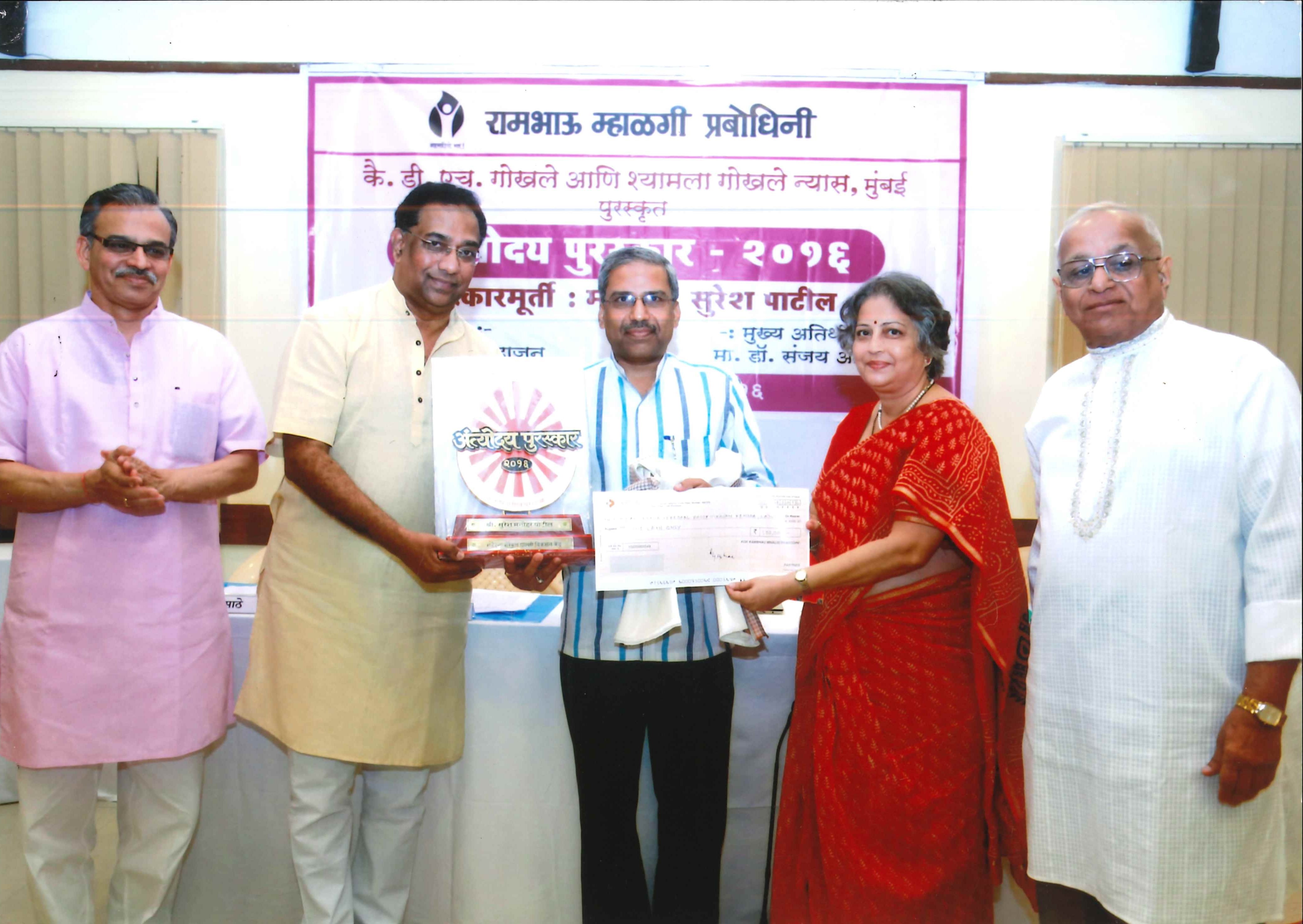 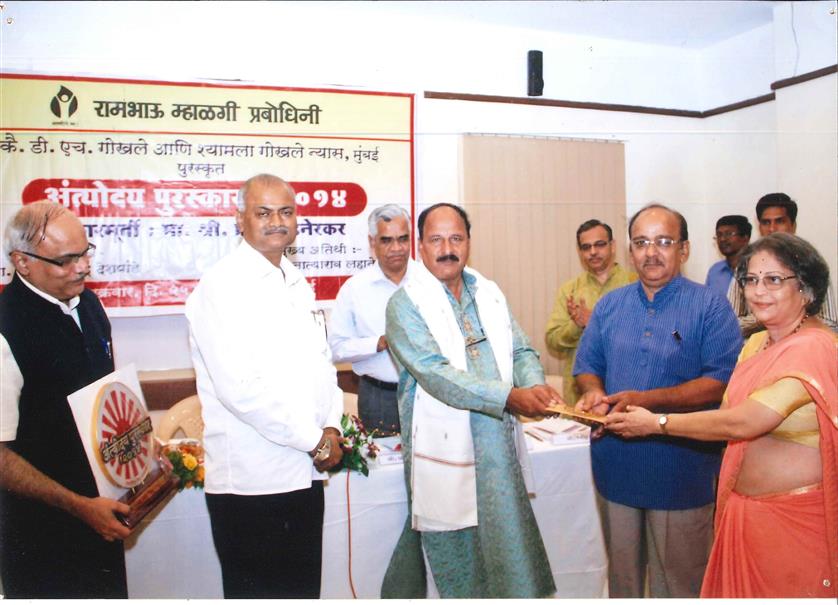 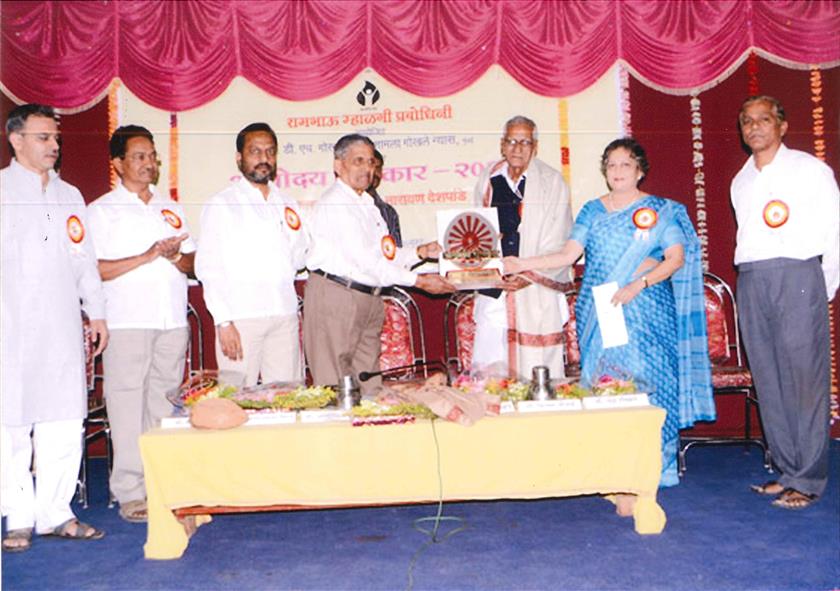 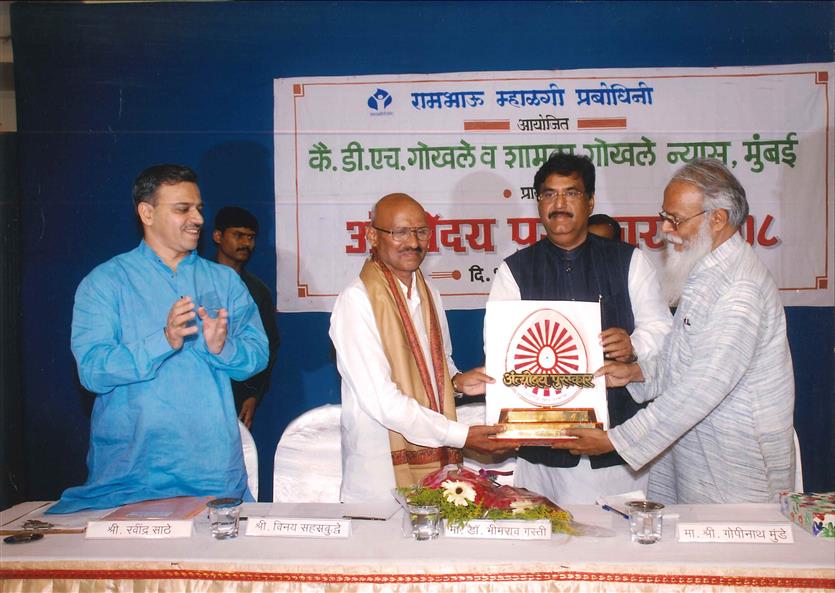 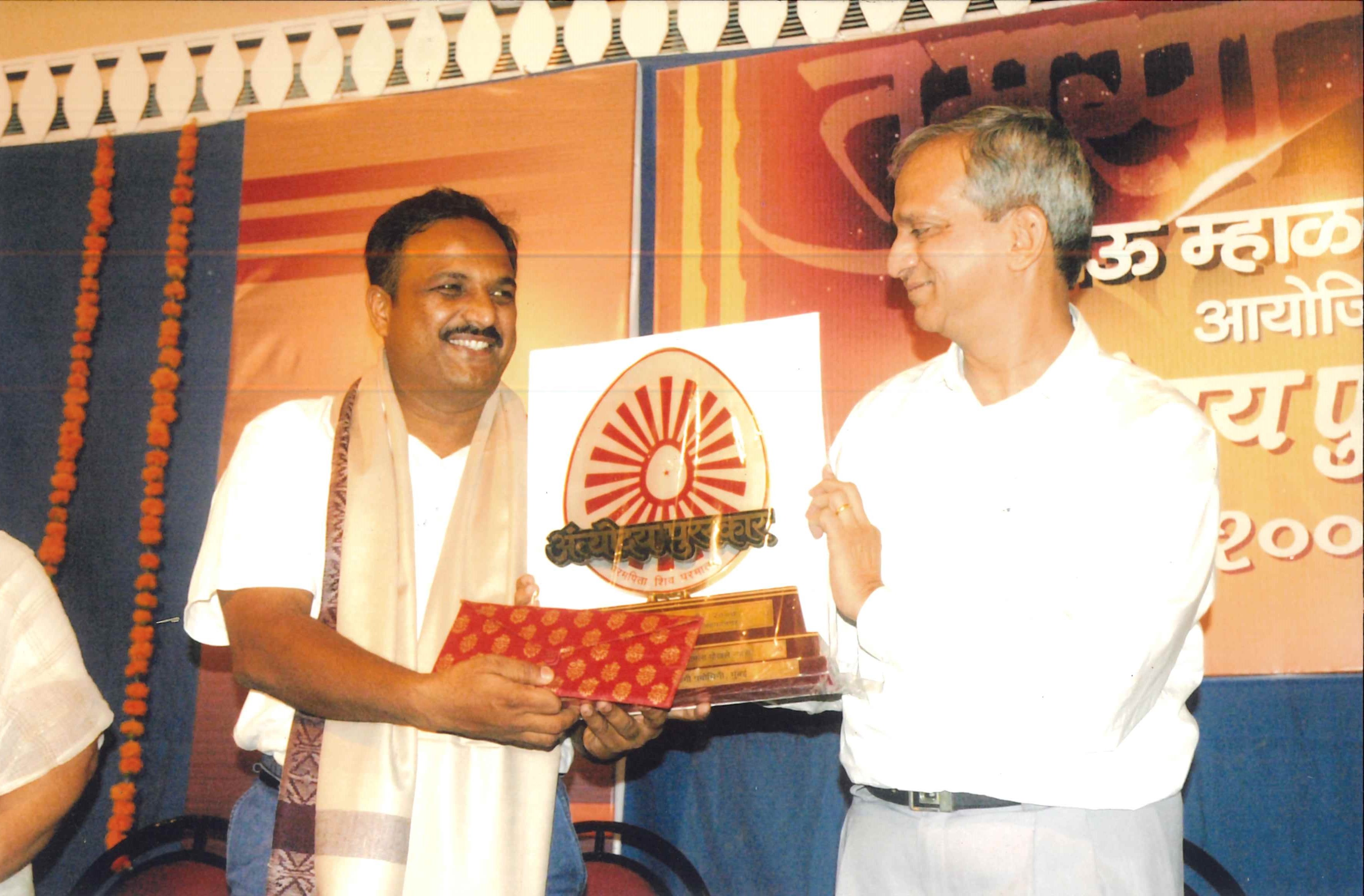 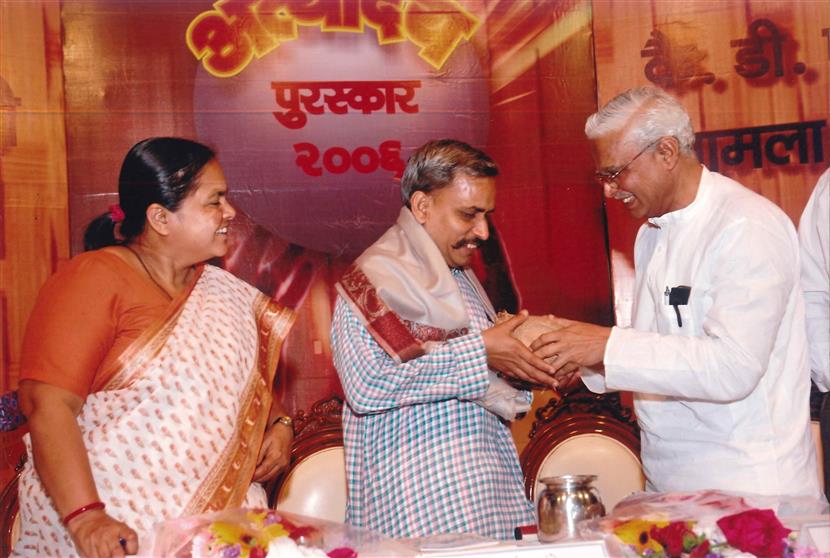 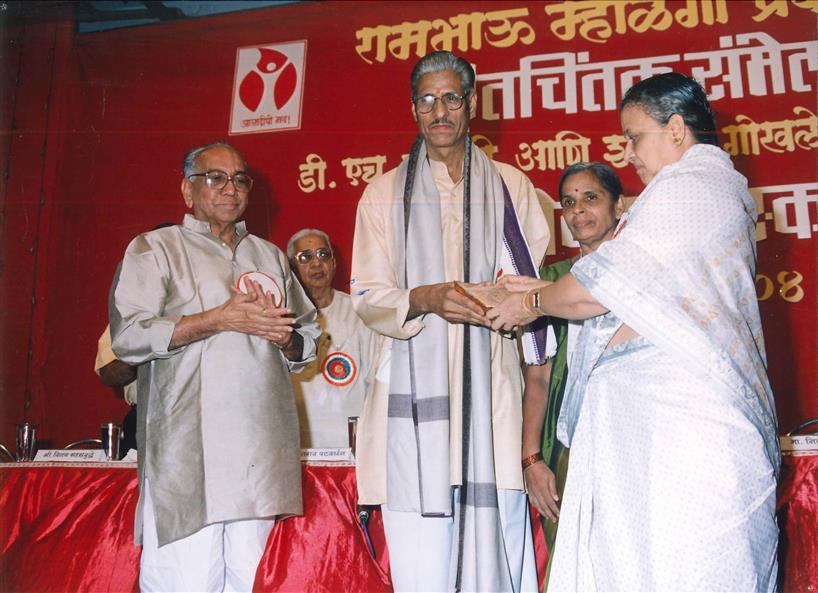 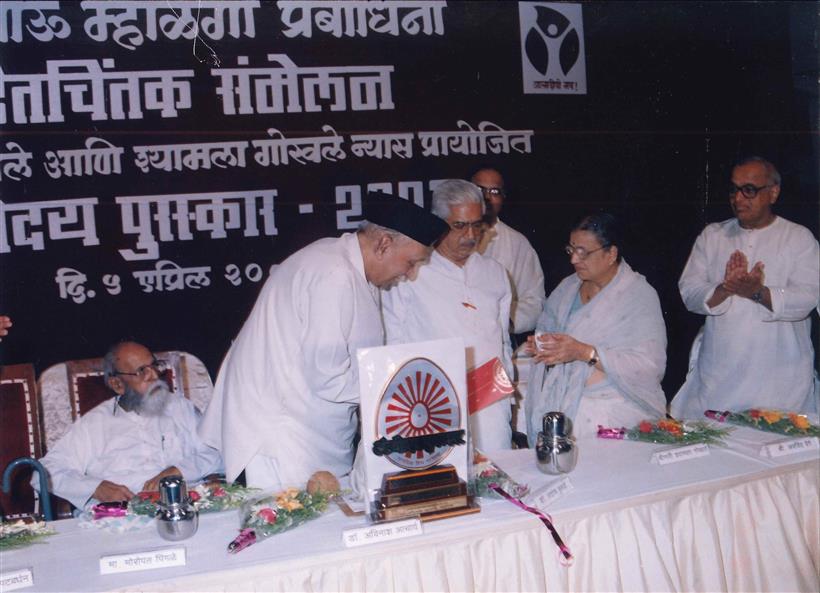 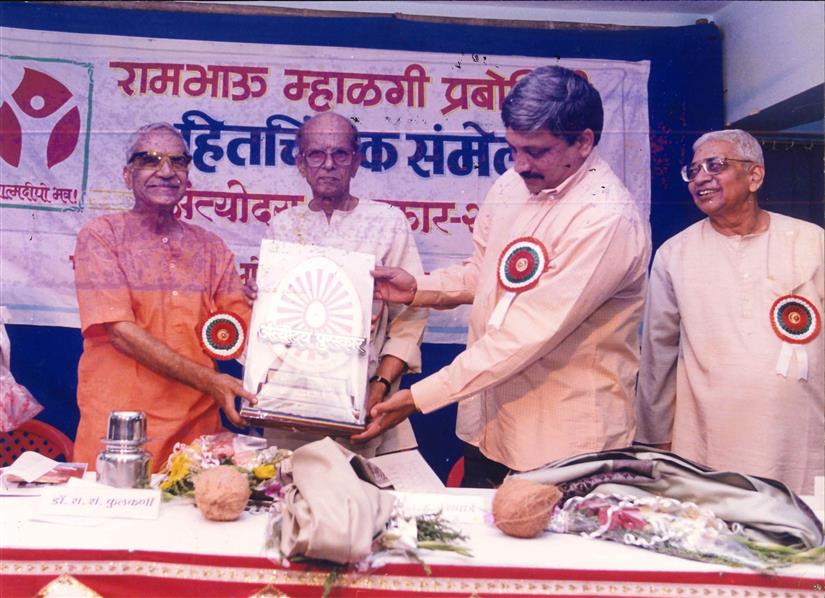 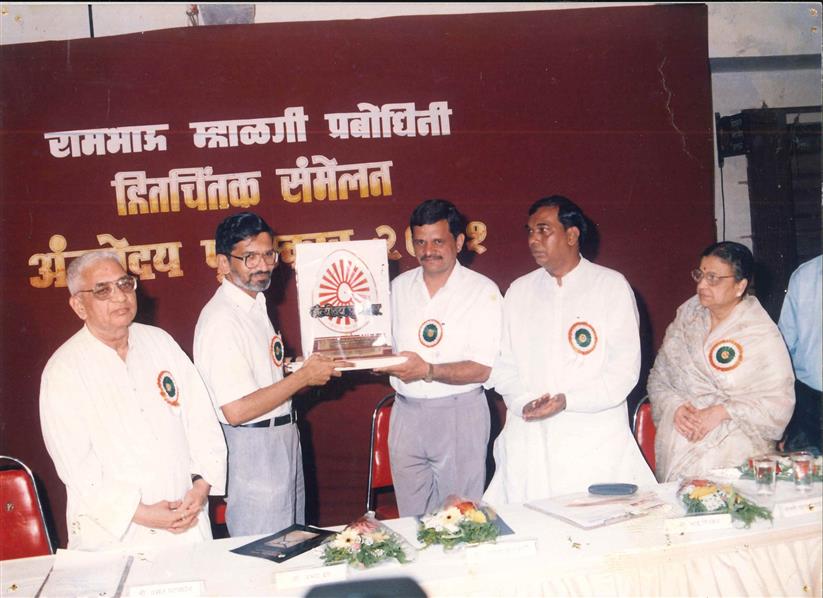