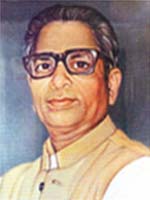 Ramchandra Mhalgi (later called Rambhau) was born on 9th July 1921 in a well-to-do agricultural family in Pune district in the western Indian state of Maharashtra. The 4th child of Kashinathpant and Saraswatibai, Ramchandra lost his mother at the age of 11. After passing the final exam in school, he joined the Saraswati Mandir School at Pune and passed 3 standards in one academic year. He also cleared the matriculation exam in first class in the year 1939.

Ramchandra’s contact with RSS (Rashtriya Swayamsevak Sangh) dates back to his school days. After matriculation, instead of staying back for further studies, he went to Kerala, as ‘Rambhau’ an RSS pracharak (a full-time social worker). Later, he returned to Pune for graduation, responding to the wish of the then second RSS Chief (Sarsanghchalak), Golwalkar Guruji.

When RSS was banned in 1948, Rambhau went underground and continued the movement against injustice. After the ban was lifted, he went back to Pune, where he bagged both the degrees of LLB and MA and cleared the bar council exam. He was entrusted the responsibility of ABVP (Akhil Bharatiya Vidyarthi Parishad: the student wing of RSS) and later of the Jan Sangh (the then political wing of RSS) and took up the responsibility as an executive officer of the party in Maharashtra. With his leadership, creativity, and practicality, he set up various fronts, trying to reach out to people from different walks of life. He also helped create awareness about the merger of Jammu and Kashmir with India. While the party kept growing, he got married to a teacher ‘Manu Ghanekar’. He beautifully balanced his personal, professional and political lives as well.

No comments to show.
Go to Top